One of my favorite Roman customs is the daily routine of buying goods from local farmers markets. Countless piazzas are full of stands every day of the week where you can pick up produce, meats, cheeses and all the other items needed for your culinary endeavors.

This past Sunday, Juli Stelmaszyk (head chef from the cooking class I took at Breaking Bread), brought a group of us to the weekend farmers market Circo Massimo. It was awesome to see some of the core values taught through Alice Water’s Rome Sustainable Food Project—cooking seasonally, organically and sustainability while supporting local farmers and economies—played out right before my eyes.

All of the items at the market are locally sourced from the region of Lazio and mostly from Rome. All the goods come from small private farms and most of the vendors work at the farms themselves. It is a much more wholesome experience grocery shopping at these farmers markets compared to the mass-produced, preservative-filled, bulk-oriented corporations, so popular in America.

The market was alive with Italians scurrying around stocking up for the week. I could sense that many were regulars and there seemed to be a special connection between the vendors and their customers. Juli gave us a rundown on the market and some tips on how to fit in so that eventually we could become regulars ourselves. She explained that you have to grab a number at the busy stands, that most items are sold by weight: so the price is by the kilogram or by the etto (Italian for 100 grams) and that at most booths you shouldn’t touch the produce yourself. She gave us a tour of the place and told us some Italian phrases so we could navigate. She introduced us to some vendors she was friendly with and had us taste some delicious wines, cheeses and chocolate spreads. There was the most flavorful seasonal produce; the most savory meats and cheeses; the most delectable sweets; the freshest bread, pastries and pastas; and some flower booths to add some more color and aroma. 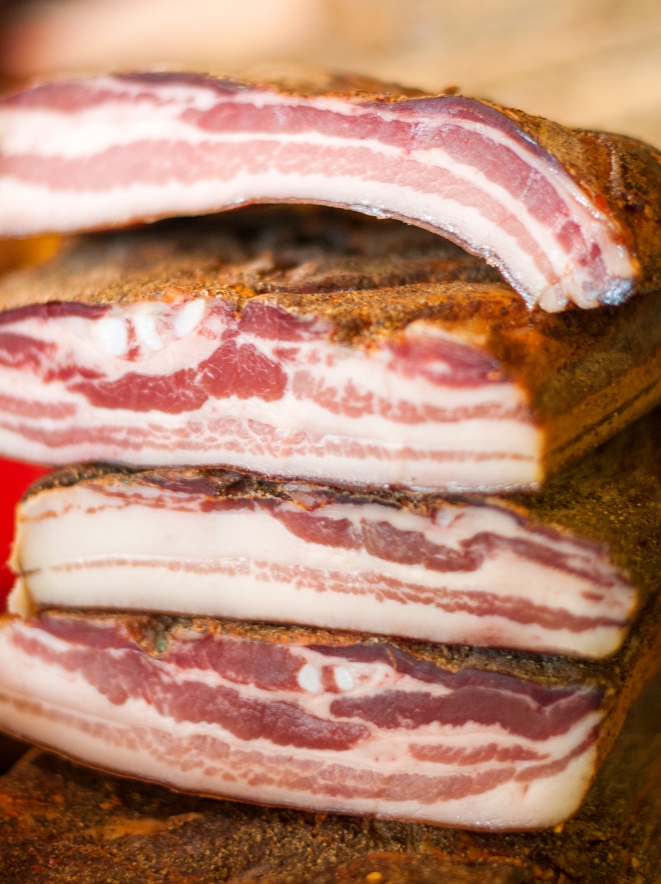 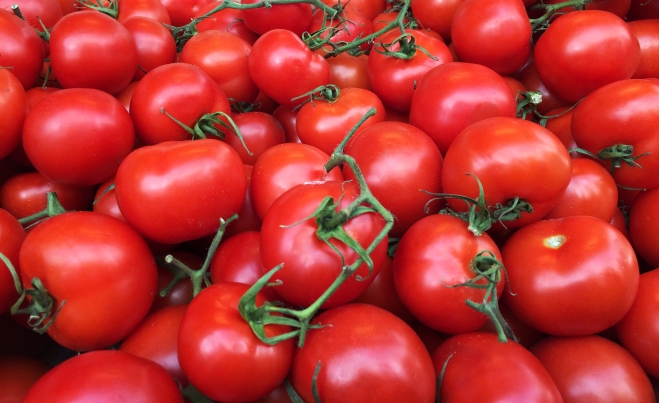 For about the past 2 years I have been a vegetarian. I decided to stop eating meat mainly for environmental reasons. The American meat industry is terrible for the environment and the excessive standard for large slabs of meat or fast-food burgers at nearly every meal is not sustainable. My uncle has been a vegetarian for decades and has always advocated it. He is an incredible chef so he also showed me you don’t need meat to create incredible meals.

That being said, before heading to Italy, I decided that if it felt right I would eat a little meat while abroad. Italian cuisine is something I have always dreamed about so I didn’t want to have to limit myself from trying new things and experiencing it all.

A group of us from my program took a cooking class through the organization Breaking Bread taught by Juli Stelmaszyk. Juli is an amazing chef who trained under Alice Water’s Rome Sustainable Food Project. The RSFP is apart of the slow food movement and prides itself on cooking seasonally, organically and sustainability. Breaking Bread teaches Italian cooking classes to groups while supporting sustainable farming through buying all ingredients locally.

My roommates where chomping at the bit for me to indulge in their carnivorous ways ever since they found out I was debating breaking vegetarian, but the time had to be right. Once we were in the kitchen, Juli gave us the menus for the evening. The first recipe for the evening was Carbonara mezze maniche, a classic Italian pasta dish with an egg-based sauce, cheese, pepper, and… bacon.

Guanciale, to be exact, Italian cured meat form the cheek of a pig. Juli asked if any of us were vegetarian and I raised my hand. She said this meat was extremely delicious and she joked that her last class “…started with 3 vegetarians and ended with just 1.”

This was it. This was the perfect moment. An opportunity to try bacon that was locally sourced from a Roman butcher while cooking in a kitchen that focuses on conscious consumption. And it was delicious! Probably the best dish I’ve had thus far in Italy.

The cooking class was an awesome experience! Learned how to make fresh handmade pasta from scratch in a black-kale pesto, the incredible carbonara, a roasted-potato appetizer, a fennel and cauliflower dish and a fresh pomegranate, citrus salad. And one of the other chefs we were working with, Carlo, who is the 3rd generation Roman pastry-shop owner, made us all a orange custard with chocolate letters reppin’ our UCEAP program. Twas an excellent night with good food, friends and of course some wine! 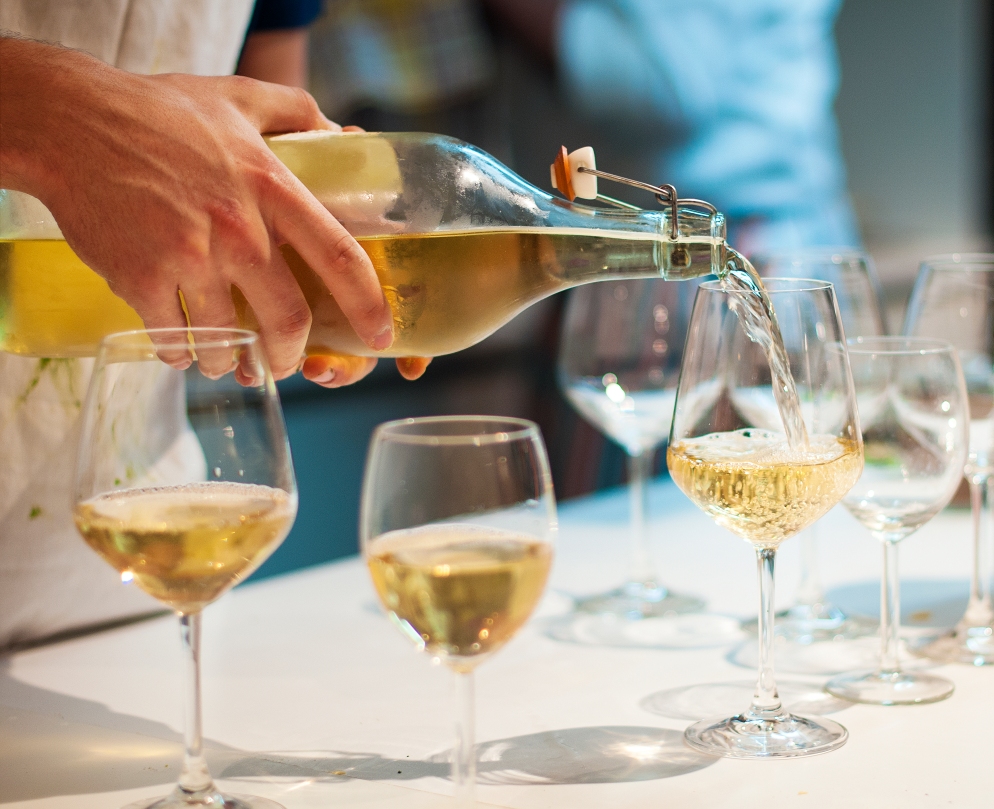 After settling into my new apartment and becoming instant friends with my new housemates, we decided to hit the town. One of my roommates met a couple of girls at the grocery store down the street from our place so we invited them over before going out. They showed up in the lobby of our apartment a few too many drinks deep and two hours late. The duo disjointedly explained there was a cab coming to take us to “…a club called something like Hari-Kari”. We tried to get some more information, but between squeals and laughter, the pair were continuously on their phone coordinating meeting up with dozens of people from their program at this supposed club.

Once the cab arrived, we realized it could only fit 4 and we had a group of 7. After an attempt at convincing the driver for an extremely tight squeeze with a huge language barrier, we realized this was not going to work out. Besides, 3 of us were not convinced that getting into a mysterious cab with a man speaking a language we couldn’t understand taking us to a club with a name suggesting it could lead us to ceremonial disembowelment was the best idea. As the meter continued to run, sucking down euro by euro, and as the Italian drivers’ temper started to boil we finally figured out the address to the club Shari Vari. 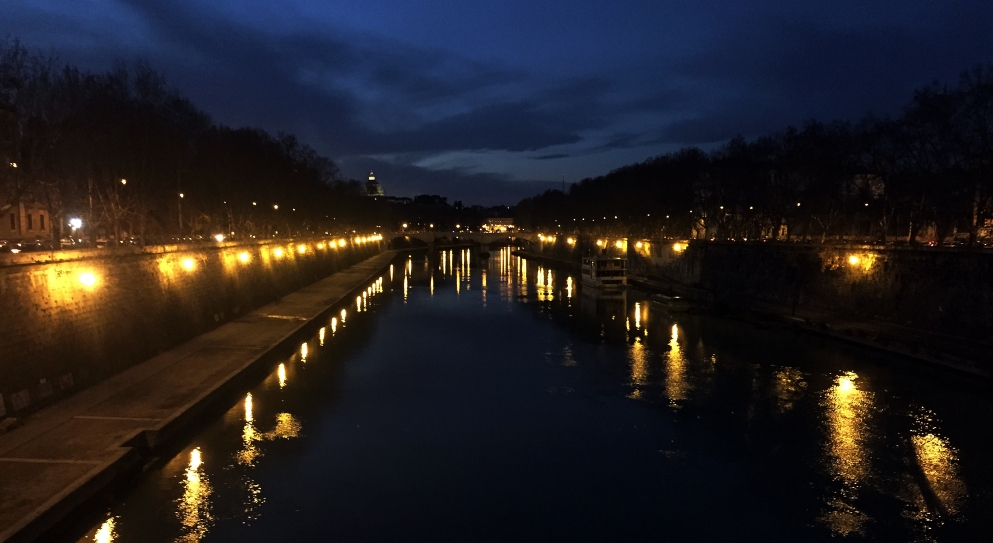 We set out of Trastevere into the crisp night air. The 30 minute walk to the club didn’t matter because I was excited to explore my new city for the first time. We reached the Ponte Sisto footbridge with an incredible view of the Fiume Tevere (Tiber River) with the Vatican glowing in the distance. Once we crossed the river we started walking through thin cobblestone roads. This is how I imagined Rome. We winded through curved streets lined with tall multicolored buildings and reached an alleyway with light strands draped across the top. The street was packed with well-dressed 20-somethings all headed in the same direction towards Shari Vari. It was about midnight and there was a huge line crowding around the bouncers behind the club—I guess this was the spot to be on a Wednesday night.

We approached the hoard, we realized it was a mass of Americans all speaking english. The line wasn’t moving and the only groups allowed in were Italians and groups with good girl-to-guys ratios. Everyone was pushing towards the font and shouting out desperate things like, “We have 8 girls and 5 guys!” or “…we know Alfredo, he told us we could get in!” We realized there was not a chance in hell they were going to let in 3 American guys so we decided we needed to make quick friends with large groups of girls towards the front. We swallowed our pride and started trying to convince the bouncers we were worthy.

After about an unsuccessful 30 minutes, my friend Christian and I decided it wasn’t worth it. We were in the center of Rome and I had never seen and I wanted to see something mind-blowing. We looked at a map and realized we were a block away from the Pantheon. We turned a couple corners and bam there it was! Just as massive and glorious as I imagined. And how bizarre that one of the best-preserved Ancient Roman buildings, originally built in 29BC stood moments away from some sleazy night club. The night was still and there wasn’t a person in site. This inspired us to go see more of this beautiful city. We then went and saw the Campidoglio, which made put us in eye-sight to the Ancient Roman Forum which led us to wander around the Colosseum at 4am. The sky a dark royal blue, the Ancient marble glowing brightly and no people crowding around the sights. This was the best way I could have imagined being exposed to my new city.

After an exhausting journey, first from San Diego to New York then New York to Germany, I finally arrived in Italy. Everyone I talked to that has studied abroad in the past told me it would only feel real once I landed… as the plane’s wheels hit the ground of the Fiumicino airport, it was real.

It was early in the morning in Rome and I was already blown away by the beauty of Italy from the plane-window. I grabbed my bag from baggage claim and walked out the door ready to start this new adventure.

Before I could even walk outside of the airport to find a taxi service a man named Eddy Jacellari approached me. He asked where I was off to and grabbed the duffel-bag from off my shoulder. I knew I was probably being swindled but he seemed like a nice guy and I didn’t have the energy to ward him off.

We entered his navy blue Volkswagen station wagon that had no TAXI sign or meter and hit the road. Moments into the drive out of the airport cars started honking at us as they were driving by. At first I thought this was a friendly Italian custom that I wasn’t aware of, but then I realized there was something wrong with the car. We pulled over on the side of the 2 lane airport exit to assess the situation. One of his back tires was completely flat! I was astonished something like this could happen after only being in a country for less than 30 minutes. I also had no clue what the procedure was when your taxi pops a tire but I just wanted to get to my new apartment… in one piece.

Eddy gets back into the car and tells me he is most definitely not going to change his tire himself and that there is an auto-shop “…only 7 kilometers down the road” (a little more that 4 miles). I’m no expert, but my gut was telling me that was a horrible idea. But this was his show and I just wanted to get to my apartment as soon as possible and lord knows I wasn’t going to try to change a tire for my first time on the side of Italian freeway.

The further we continued, the sketchier it got. The car reeked of burning rubber and I could see the wheel loosely shaking in and out from the car as pieces of rubber flew off periodically. Eddy would try to reassure me by saying things such as “…only 4 more kilometers to go,” but I was convinced we were going to cause an accident.

Just as the rim was about to spark on the street we safely pulled into the auto repair shop! As you can seen in the photo to the left, the tire was completely blown out. Lucky for me they had the spare tire put on in only 2 minutes and we were back on track to go to me new apartment!

I’m hoping this wasn’t an omen for how the rest of my trip will go. Although this wasn’t the smoothest transition into my new country, I got a funny story and my first friend in Italy out of this endeavor.